Traditionally, Ethernet has a maximum frame size of 1500 bytes. An Ethernet packet larger than 1500 bytes is called a jumbo frame. When a network device gets a frame that is larger than the configured MTU, the data is fragmented into smaller frames or dropped. With jumbo frames, the ethernet packet can hold more data which makes data receiving more efficient as normally you would have to send 6 packets to transfer the same amount of data. 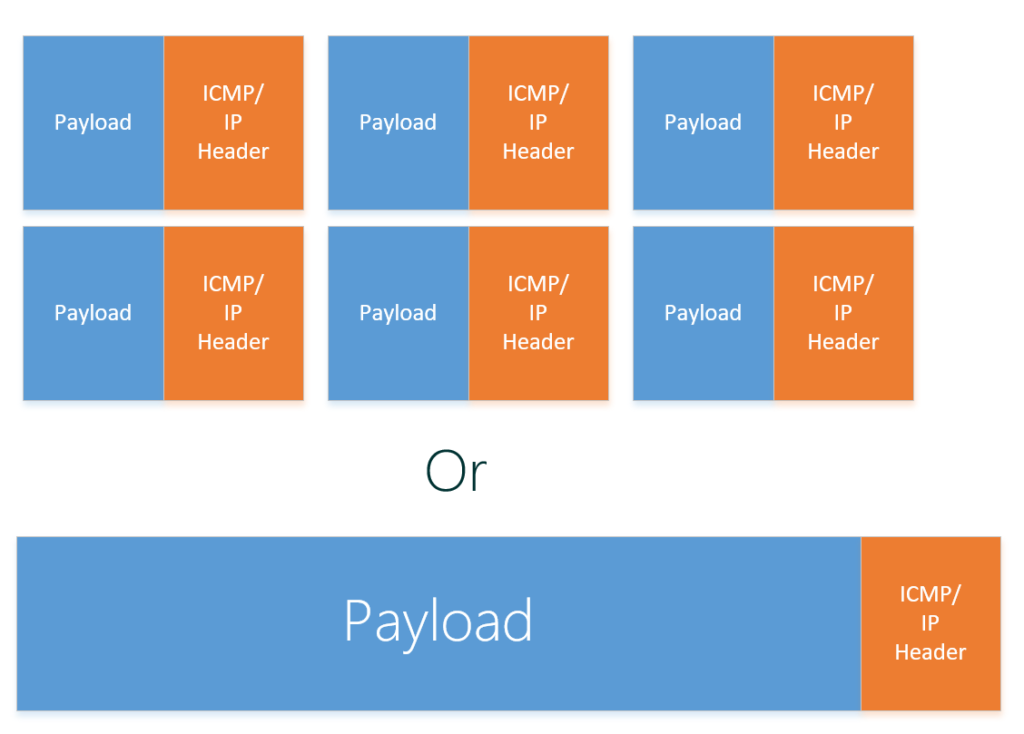 Jumbo Frames are always under debate, if it really makes a difference and need to be enabled.
I’m not going into research here, but see this blogpost for some performance tests.

In short, jumbo frames enhance IOPS and latency by 20-30% and decrease CPU usage.
I don’t see a reason not to enable it, which is fairly easy: 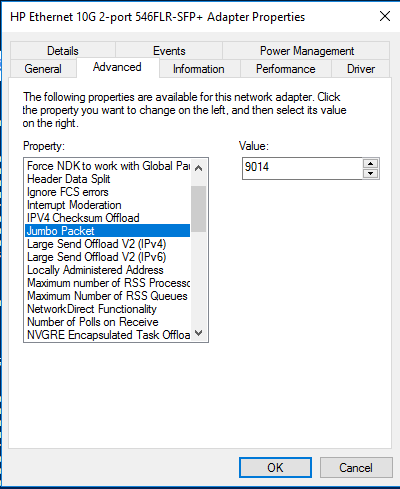 Our beloved Powershell can also do this for you:

Do not forget to enable jumbo frames on the switch as well.

The “-f” parameter does not allow packets to be fragmented.

The “-l” parameter specifies the size of the packet, in this case we use a large packet (jumbo frame).
If you get reply’s everything works great!

Non-uniform memory access (NUMA) nodes are servers with more than one system bus. These platforms can utilize multiple processors on a single motherboard, and all processors can access all the memory on the board. When a processor accesses memory that does not lie within its own node (remote memory), data must be transferred over the NUMA connection at a rate that is slower than it would be when accessing local memory. Thus, memory access times are not uniform and depend on the location (proximity) of the memory and the node from which it is accessed.

Basically what the above text describes is that a server’s hardware is fragmented in even pieces. Based on where the processor, memory and PCI slots is located on the motherboard its “assigned” to each other into a NUMA node. This way I/O is optimized and happens in the same “region” although I/O can cross NUMA nodes when needed, the latency will just be higher. Typically a NUMA node is formed on a physical processor socket, so if you have a two socket machine you would have two NUMA nodes.

To figure out how many NUMA nodes you have you could use the following Powershell cmdlet: 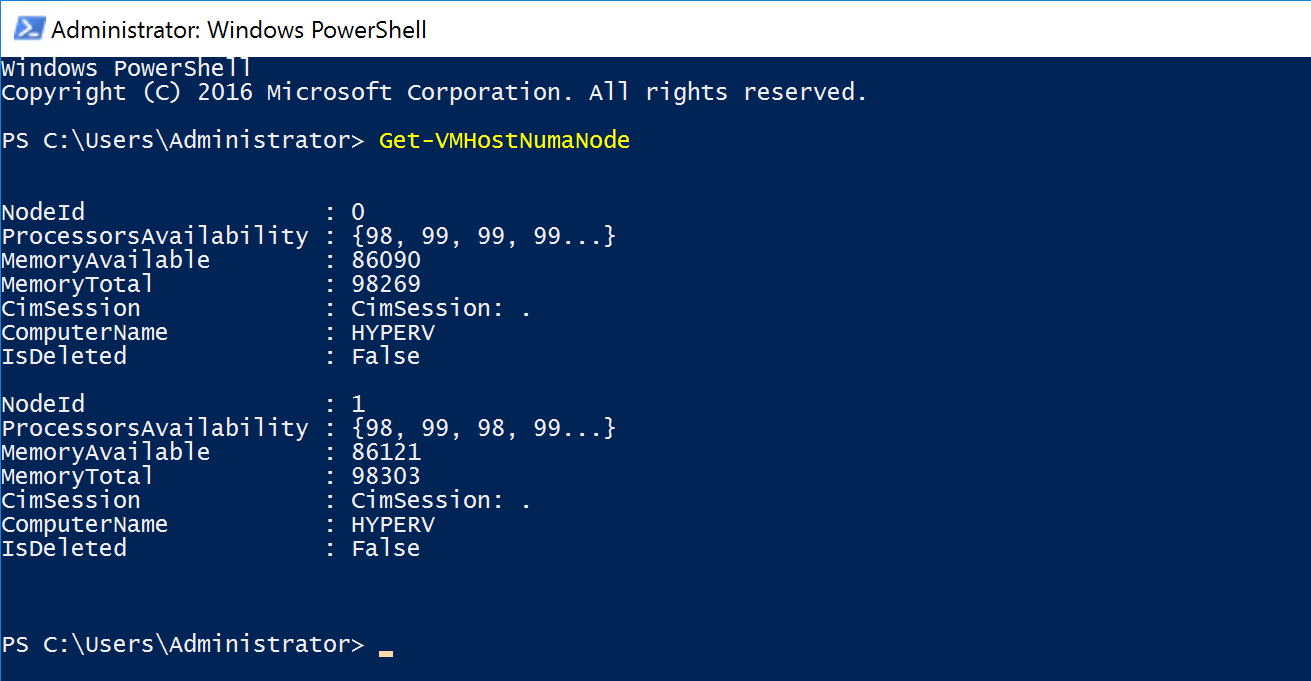 Physically the PCI-e slots are bound to a NUMA node, but that doesn’t mean that the NICs in the operating system are bound to the same NUMA nodes. By default all NICs seem to bind to NUMA node 0.

As you can see in the diagram above, the NIC (in the OS) on the left is physically installed in the PCI-e slot located in NUMA Node 0 and the CPU in the same NUMA node is processing I/O. The NIC on the right is physically located in NUMA Node 1 but the CPU in NUMA node 0 is processing I/O which is not optimal because both NICs are interrupting the same processor while we have another processor that can be used as well. On top of that the I/O’s also have to travel over the interconnect which causes latency.

You can view this latency by using the Get-NetadapterRss cmdlet:

Modern NICs allow assigning to a specific NUMA node in the operating system which overcomes the situation outlined above. In the example below we used a Mellanox ConnectX-3 Pro adapter. 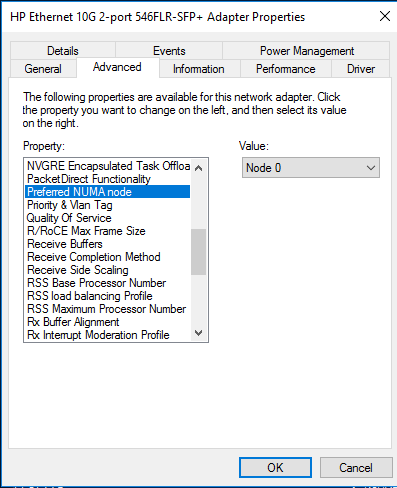 After changing the NUMA node assignment, you can see that the latency is reduced:

“But hey, SMB Direct (RDMA) doesn’t use the processor right?”

Correct, if you’re using RDMA your SMB traffic already bypasses the processor but it still applies for any other traffic (Including traffic of your virtual machines!). If you are not using RDMA this could help a lot.

Receive Side Scaling (RSS) is a very important aspect in networking on Windows. RSS makes sure that incoming network traffic is spread among the available processors in the server for processing. If we do not use RSS, network processing is bound to one processor which will limit approximately at 4GBps. Nowadays every NIC has RSS enabled by default, but the configuration is not optimized. Every NIC is configured with “Base Processor” 0, meaning it will start processing on processor 0 together with the others NICs but more importantly it’s the default processor for Windows processes as well.

To optimally configure RSS we want to start at processor 1 so we don’t interfere with processes landing default on processor 0. On the other hand, we also want to keep the NUMA node assignment as discussed above in mind so that RSS traffic is not using a processor in NUMA node 1 while the NIC is bound to NUMA node 2. This will have the same latency consequences as described above. 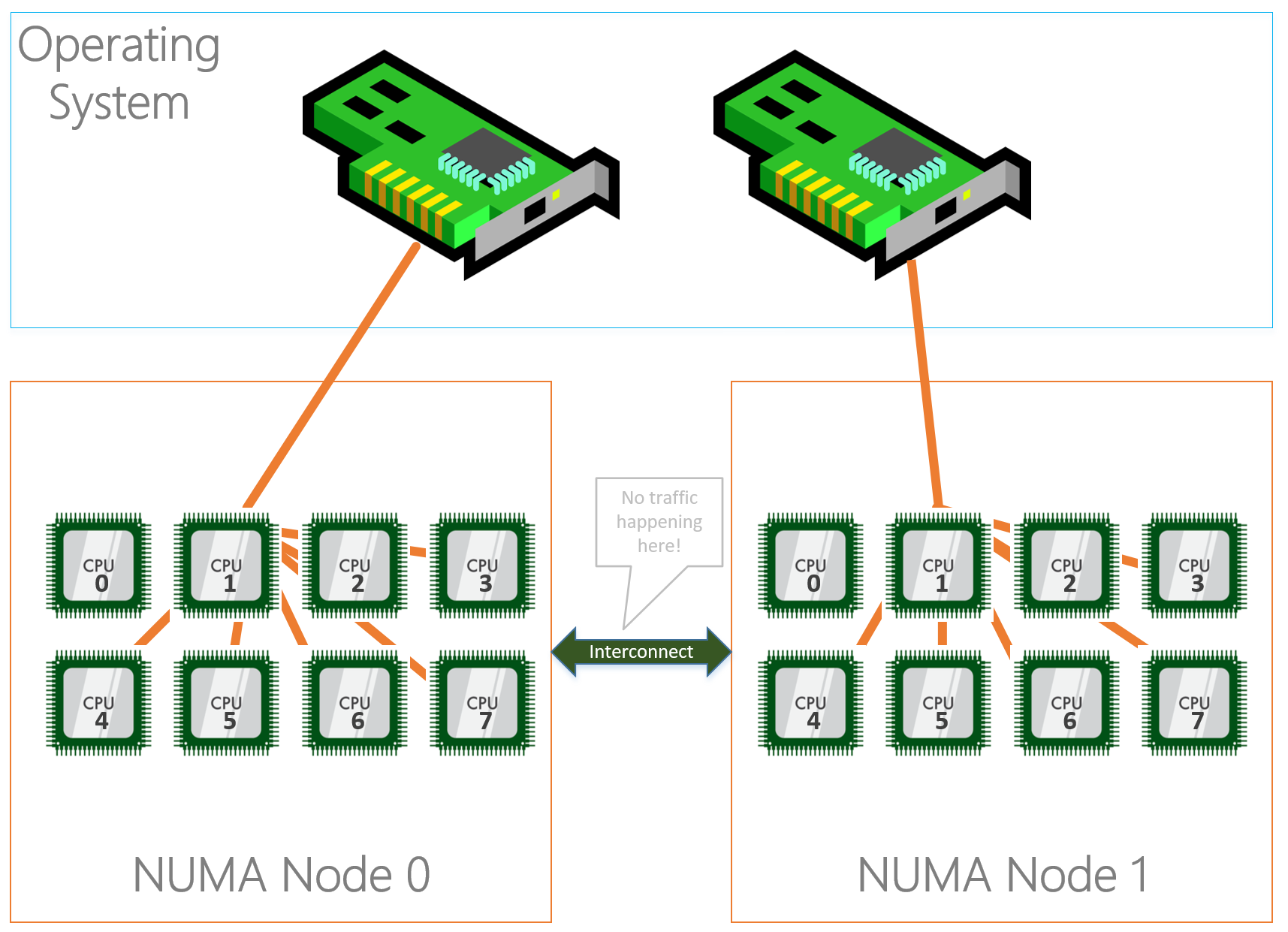 To configure RSS, for the physical NICs and the virtual NICs you can use the Set-NetAdapterRss cmdlet.

When you specify the “-NumaNode” parameter, it automatically changes the “Processorgroup” to the right number. We specify the “-BaseProcessorNumber” parameter to let RSS start on processor 1 instead of 0.

Examples to make it more clear:

This example uses processor 1 as start and the range stops at processor 6.

This example uses processor 8 as start and the range stops at processor 11.

With the entrance of virtualization on servers and RSS we hit some limitations because RSS wasn’t built for this “new world”. Long story short, when having a virtual switch on the system where physical adapters are bound to, RSS is disabled. This caused scalability issues that needed to be solved… hello VMQ.

The real benefit of VMQ is realized when it comes time for the vSwitch to do the routing of the packets. When incoming packets are indicated from a queue on the NIC that has a VMQ associated with it, the vSwitch is able the direct hardware link to forward the packet to the right VM very very quickly – by passing the switches routing code. This reduces the CPU cost of the routing functionality and causes a measurable decrease in latency.

Unlike RSS where incoming traffic is spread among processors, VMQ will create a queue for each mac-address on the system and link that queue to a processor core. This means that a mac-address, which translates to a NIC of a VM or a host vNIC does not have more process power than 1 processor core. This limits the network traffic speed in the same way it does when we do not enable RSS to about 4GBps. 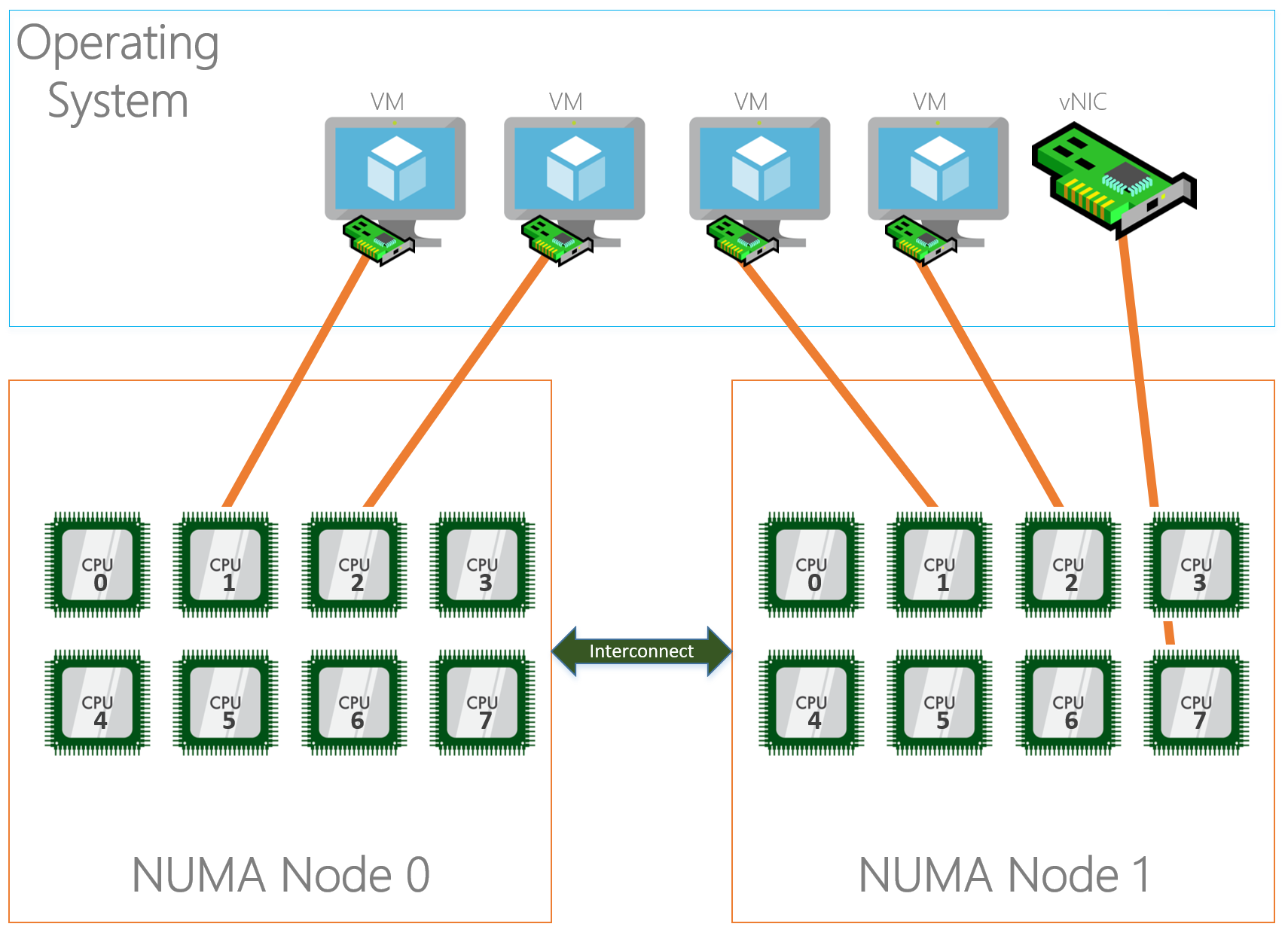 Some NICs have the capability to enable ‘dVMQ’ which stands for Dynamic VMQ. With this, queues can be reassigned to a different CPU at run time based on CPU load and system power balancing helping with a ‘noisy neighbor’.

When configuring RSS, VMQ follows this configuration. You can also manually configure VMQ using the “Set-NetAdapterVMQ” with the same parameters as the RSS cmdlet uses.

New in Windows Server 2016 is a technology called VMMQ. The name doesn’t leave anything to a surprise, with Virtual Machine Multi Queuing multiple queues can be assigned to a VM NIC or Host vNIC. This helps us to get around the restriction of VMQ where we only have the ability to use one physical core per VM, if 4GBps of network traffic to your VM isn’t enough 🙂 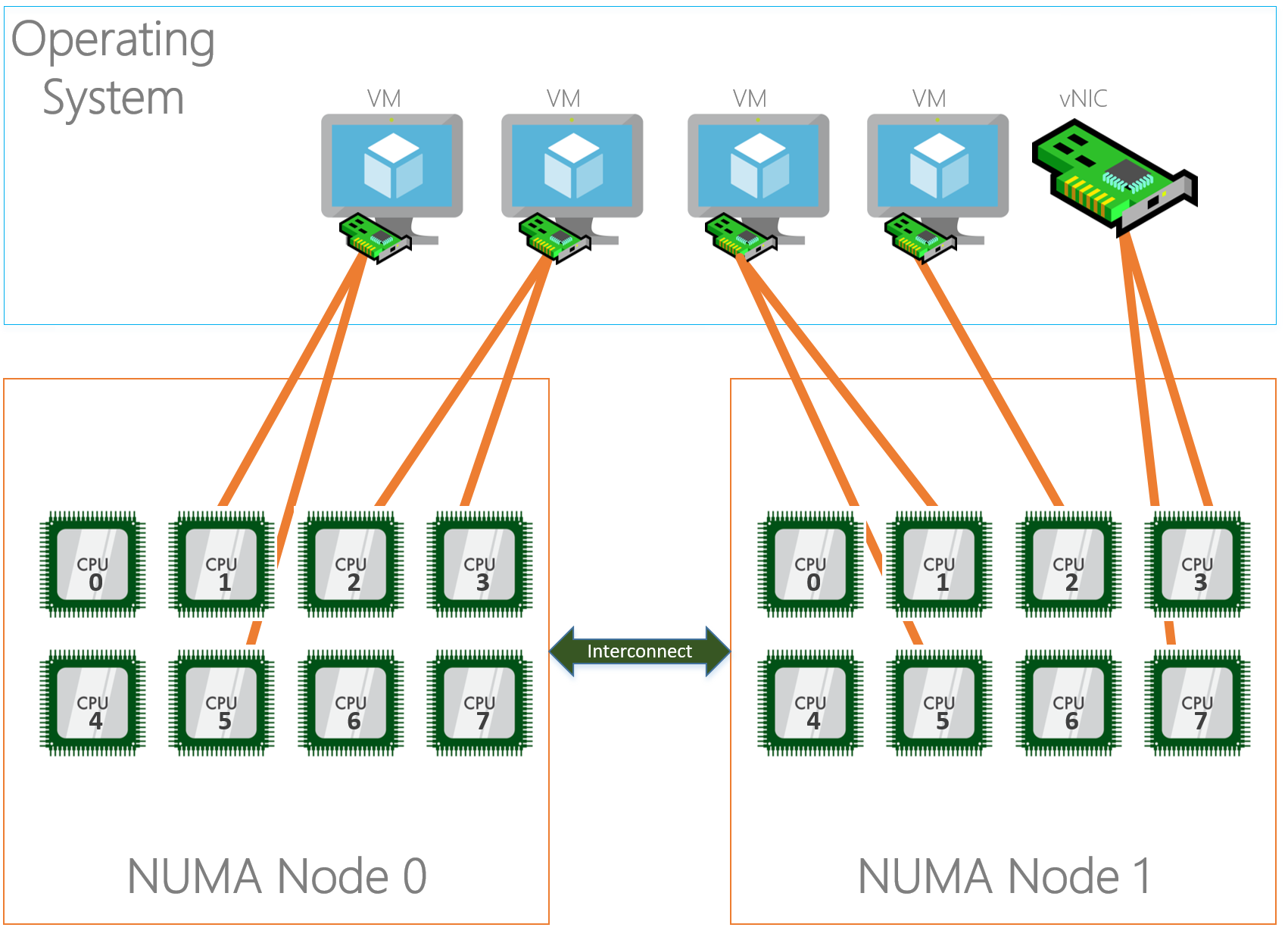 VMMQ can be enabled using Powershell.
For a specific VM:

For a Host vNIC:

After you have bound your physical NICs to a NUMA node, configured RSS and VMQ to use the right NUMA node and processors there is one more step to take.

By default an algorithm is in place to affinitize a vNIC to a Physical network adapter when they are in a team (LBFO or SET). This algorithm does not always do the things you want, If I have two storage NICs created on my vSwitch I would like them affinitized both on a different physical adapter. 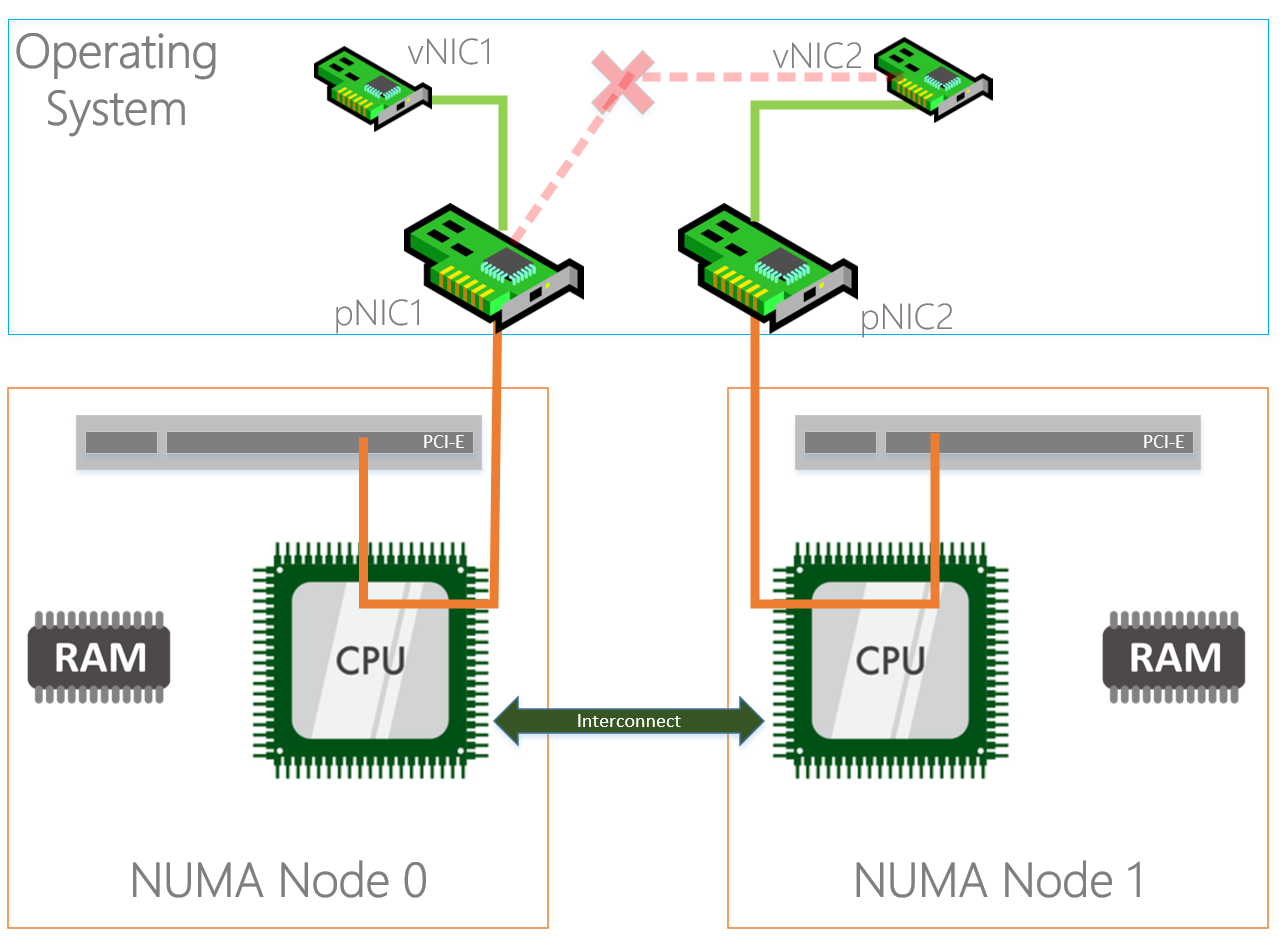 Below you will see an example of PerfMon where on “Cluster2-Node1” everything is affinitized properly but on the other two nodes you can see that one of the two physical adapters is doing no traffic at all. This is because both the vNICs are affinitized on one physical adapter.

You can affinitize a vNIC to a pNIC using the following Powershell cmdlets:

With the above outlined settings and configurations you come along way optimizing your network environment on Windows Server 2016. If you follow the steps, all network related settings are aligned and optimized. Do not forget to test your environment.